The world is getting smaller and more complex. National economies are more integrated globally, but national deficits and the need for tax revenues are driving unilateral measures. The original objective of the base erosion and profit shifting (BEPS) project has been described as ensuring that profits are taxed where economic activities creating those profits are performed or where value is created. Yet there is no widespread consensus as to what value is created, how it should be measured, and how it should be taxed. Here are the key elements of the Organisation for Economic Co-operation and Development’s (OECD’s) policy response:

The US and the End of Deferral—GILTI as the Ultimate Unilateral Measure?

The TCJA’s primary goal of moving toward a territorial system, where active foreign earnings are not subject to tax when repatriated, was to eliminate the lockout effect. At the time the TCJA went into effect, there were approximately two to three trillion dollars of unrepatriated foreign earnings. A major component of the TCJA was the Section 965 transition tax, which immediately taxed formerly unrepatriated profits as subpart F income at a very low effective tax rate. This transition tax resulted in previously taxed earnings and profits (PTEP) that can be repatriated free of US income tax. The end result of the TCJA’s complex and highly interrelated (and sometimes circular) international tax provisions has created a situation where even the most basic corporate transactions, including repatriation planning (PTEP distributions trump Section 245A), need to be modeled to determine their US tax impact.

Foreign Branch versus CFC and Subpart F versus GILTI

A foreign branch for US tax purposes is generally defined as a qualified business unit operating a trade or business in a foreign country and is generally subject to the income tax laws in the foreign country in which it operates. The income, deductions, losses, and credits of a foreign branch held by a US person are taken into account in calculating tax liability, which may be beneficial if the branch generates losses that can offset its owner’s other income. However, the TCJA introduced two negative aspects to the tax treatment of foreign branches:

One potential upside on the outbound asset transfer is the Section 367(d) treatment of the transferred goodwill and going concern value as well as other intangible property. In effect, this generates annual income to the US person as a contingent sale of the property commensurate with the income generated by the property transferred. This results in foreign source income in the general limitation basket, similar to the treatment of royalty income, which should also qualify as FDII. The regulations also allow the CFC to deduct the deemed payment from its subpart F income and tested income for GILTI purposes. This deemed deduction against potential tested income also has implications for the GILTI high-tax exclusion effective tax rate analysis. 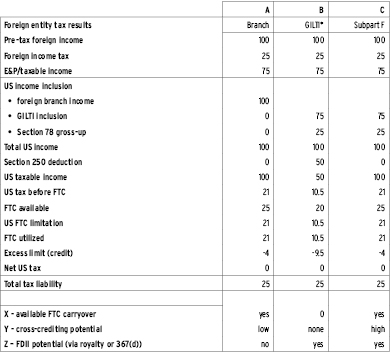 Table 1 compares the nominal US taxation of a foreign branch with taxation resulting from a controlled foreign corporation (CFC) structure.

GILTI or Not, and the High-Tax Exclusion Election

What is the cost of being GILTI, anyway? In the last example, it appeared as though the GILTI inclusion did not incur any US income tax. But what is the US tax cost if the foreign effective tax rate is less than the twenty-one percent US tax rate, and what is the break-even rate of foreign income tax such that there is no incremental US income tax—considering the fifty percent Section 250 GILTI deduction? Answers to these questions can be found using Table 1.

Table 2. GILTI Break-even Analysis, With and Without Section 861-8 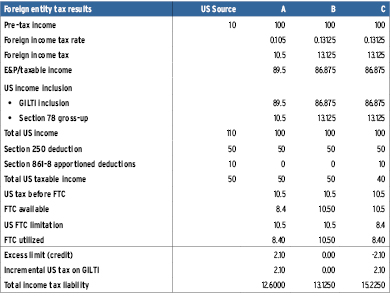 So, under what circumstances should you consider electing the GILTI high-tax exclusion? The simple answer is if the high-tax exclusion reduces your overall US income tax liability. So far, we have considered situations present in columns A, B, and C. We will explore these and other effective tax questions after considering the potential impact of the GILTI inclusion and its associated foreign tax credit on a taxpayer’s potential base erosion minimum tax amount (BEMTA) or base erosion and anti-abuse tax (BEAT) liability.

The final GILTI high-tax exclusion rules were included in the July 23, 2020, regulations. For the income to be excluded from tested income, the foreign effective tax rate of the tested unit must be greater than ninety percent of the highest Section 11 tax rate. Therefore, given the current twenty-one percent Section 11 rate, the potential tested income must have a tax rate higher than 18.9 percent to qualify as high-taxed. The high-tax test is performed independently for each CFC at the level of each tested unit. The CFC itself is a tested unit, as are any passthrough units flowing into the CFC such as disregarded entities and partnership interests. Tested units subject to the same taxing jurisdiction are combined, so the tested unit is generally determined on a country-by-country basis within each CFC. The final regulations retain the all-or-nothing requirement for all high-taxed income of all CFCs controlled by the taxpayer to be covered by the election. Therefore, any low-tax GILTI flowing into the US tax net cannot be sheltered by the high-taxed income left behind. Hint: if the remaining low-taxed GILTI flowing into the United States has a blended effective foreign income tax rate of 13.125 percent, you have a winner!

The final rules are more favorable than the earlier proposed rules, in two very important ways:

This list shows those situations most likely to succeed under the GILTI high-tax exclusion:

This list includes potential downsides to the GILTI high-tax exclusion:

Taking a Global Perspective—MLI or Bust?

As noted above, the environment for multinational companies is more global than ever. Although many tax executives at US companies have rightfully focused on digesting the significant changes shepherded in by US tax reform, the rest of the world has only accelerated what can truly be described as global tax reform. The OECD has continued to refine elements of its original BEPS project while moving forward with sweeping proposals designed to fundamentally alter longstanding international tax concepts, that is, Pillars One and Two. At the same time, many countries have moved forward with unilateral measures focused on capturing their perceived “fair share” of global profits typically associated with the digitization of the overall economy. This has been exacerbated by the global COVID-19 pandemic, which has left many countries scrambling to generate additional tax revenue in the wake of stimulus spending.

During ongoing efforts to understand the impact of US tax reform and to transition to affirmative planning and risk-mitigation strategies, there is a real opportunity to leverage the underlying data and information collected as part of this process to inform a more global perspective. Some specific examples include: