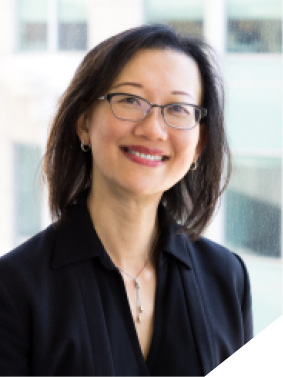 After practicing as a corporate attorney at Davis Polk & Wardwell in New York, Shirley Chin returned to San Francisco and spent several years advising nonprofits. In addition to general board advisory and corporate governance work, the technical law that governs exempt organizations is tax law, she notes, with a special focus on Internal Revenue Code Sections 501 through 515.

One particular project stood out for Chin: “I was advising GreatSchools, and it was still a relatively new organization at the time. The organization wanted to start charging a fee to provide premium service to its users. It was characterizing these fees as program service revenue. Under U.S. tax laws, in order to maintain public charity status, an organization needs to receive at least 33.3 percent of its support from the government or general public over a rolling five-year period. Public charities are constantly monitoring this public support ratio, making sure that a large grant receipt does not inadvertently blow the public support test. Program service revenue has no impact on this public support ratio.”

However, Chin notes, membership fees are considered public support. “I noticed this opportunity right away and recommended that GreatSchools recharacterize the program service fee as a membership fee, and the premium services as membership services (with insubstantial value under the guidelines provided in Revenue Procedures 90-12). I also provided practical suggestions on how to change their website to support the recharacterization. This simple recharacterization improved GreatSchools’ public support analysis and allowed their users to become members and also get a charitable deduction for the membership payment.”

This was a pivotal point in Chin’s career, she explains: “That intersection of the broad tax concept with the details, the numbers, and how they advance a company’s strategic vision is what I find most interesting about tax law. In other areas of law, you can talk grand principles and concepts. Constitutional law is especially lofty. In tax law, the devil is always in the details, and that is what makes it so fun. I was hooked, and from there, I moved to the IRS Office of Chief Counsel and spent almost a decade litigating tax cases, advising audit teams on examination of large corporate and international taxpayers, and working with the National Office to issue public guidance because of my role as an industry counsel and involvement in various practice network groups.”

Chin, now deputy general counsel and head of tax at Sunrun Inc., a provider of residential solar electricity, notes that her company recently concluded a long journey that illustrates the centrality of tax to a company’s bottom line and the perils of leaving out tax experts. The State of Arizona wanted to encourage renewable energy. It passed a property tax exemption that states that a solar energy system installed for onsite consumption has no value and adds no value to the property where it is installed. This exemption means that property owners do not have to worry about their properties being reassessed and facing increased property tax burdens due to the solar installation. “After the passage of A.R.S. 42-11054, our policy team claimed victory,” she says.

However, she explains, this is a gray area. “Is this a real or personal property tax exemption? Are third-party-owned solar installations eligible for this as a business personal property tax exemption? After many years of granting us the benefit of the exemption, the State of Arizona Department of Revenue in 2014 took the position that A.R.S. 42-11054 does not apply to leased solar systems and started to assess Sunrun and other third-party developers as traditional electric generation facilities under A.R.S. 42-14155. Litigation ensued for more than three years. Finally, the Arizona Supreme Court agreed with us that Sunrun is not an electric generation facility and therefore not subject to assessment under A.R.S. 42-14155. The litigation team claimed victory, but the court left open the question as to whether the solar exemption applies and the possibility that counties may be able to assess our leased systems as traditional business personal properties,” she says.

“Up until then,” she adds, “tax had not been included in the policy-making or litigation process, and we started to get increasingly concerned about the implication of these unresolved property tax questions. Sure enough, Arizona counties started to assess Sunrun and other developers. Because traditional utilities are centrally assessed in Arizona, they enjoy an eighty percent discount on their cost basis. Under the counties’ assessment schedule, Sunrun has no such discount factor. Our property tax exposure in Arizona quintupled overnight.”

What are the best parts of working at her current job? “It is very exciting working in the renewable space. Congress recognizes the importance of solar energy and supports it through incentives in the tax code. This means I am involved in many of Sunrun’s most important business decisions. I lead our tax controversy and tax policy efforts and work with our project finance, business, and new market teams. The broad scope of my responsibilities at Sunrun allows me to solve complex tax problems at a very high level.”

After leading Sunrun to a legislative victory in Arizona, resolving the open property tax questions in its favor, Chin now is leading a cross-functional team to launch its services in Puerto Rico, a place where the traditional utilities structure was decimated by Hurricane Maria in 2017. “In the rebuilding effort, instead of simply resurrecting the old structure, we are working with the governmental authorities in Puerto Rico to innovate, to think outside the box, and to set up a virtual power plant there. It is exciting and extremely rewarding.”

What did Chin learn from her experience at the IRS? “I learned how to lead a team of professionals at the IRS. Because tax law is so complicated, it is not just the plain reading of a particular code section or regulations, but also how they interact with other code sections and regulations, as well as their interplay with numbers, financial statements, and a strategic goal. To accomplish any project, I had to draw out the skills and expertise of my team members, organize the information, and shape a path forward or put forth an interpretation of the law that makes sense.”

Both of her managers at the IRS were instrumental in her growth as a tax professional. “Anthony Kim hired me and pushed me into difficult projects at the IRS,” she says. “My very first case that went to trial was designated for litigation by the IRS, so it never went to Appeals. Due to the high-profile nature of the case, the IRS took the unusual step of assigning me to join the [Department of Justice] trial team, and so I was appointed pursuant to 28 U.S.C. Section 515 as a Special Assistant U.S. Attorney to defend the government in AT&T, Inc. v. United States of America, Civil No. SA-07-CA-197-OG (W.D. Tex. Jul. 16, 2009), aff’d, 629 F.3d 505 (5th Cir. Tex. 2011), cert. denied, 565 U.S. 815 (2011). I had the pleasure of working with Grover Hartt, Mike Wilcove, and Jonathan Blacker, all highly regarded, top-notch attorneys at the DOJ. It was a great learning experience. The government prevailed, and I was awarded a Lucite—a coveted award for litigators at the IRS for successfully litigating a case with significant impact for the government. Julie Fields was also my manager at the IRS; she was my mentor on so many levels. She has incredible E.Q. and an ability to bring out the unique strengths of each member of her team. As I lead my teams, I use Julie as my example.”

Things to Know About … Shirley Chin