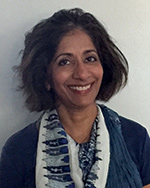 Many of us don’t like change. Sandhya Edupuganty embraces it. “I recognize the importance of and enjoy change, which is why I specialized in tax and have had the benefit of seeing what works and what can be improved. I believe it is important for tax departments to streamline and automate processes as a means for mitigating tax risk and to focus on value add tax initiatives. Over the years, I’ve developed the ability to see the big picture and to identify opportunities to minimize manual inputs,” she explains.

Early on, varying roles at National Medical Care Inc., KPMG Peat Marwick, Ernst & Young LLP, and as a self-employed consultant enabled Edupuganty to achieve a breadth of tax experience. As a tax supervisor at DSC Communications Corp., she helped structure and implement a Texas limited partnership that generated annual franchise tax savings of $3 million to $6 million. As federal tax manager at Alcatel USA/DSC Communications Corp., she was responsible for tax compliance and planning for the consolidated federal income tax area of a billion-dollar company and spearheaded a multiyear research and development tax credit study in conjunction with Ernst & Young, supporting and sustaining the multimillion-dollar credit as part of the IRS audit.

The next stop in the journey: Aerus LLC (formerly Electrolux LLC), where, as director of tax, she structured an intangible asset sale of $50 million, which resulted in “a zero tax distribution consequence through the permanent and temporary deferral of income taxes.” At her last destination before landing at Texas Instruments—Flowserve Corp.—she served as director of tax compliance and then director of tax reporting. In the latter role, she was involved in the customization and coordination of the rapid implementation of a foreign income tax package module across seventy major foreign jurisdictions. An exposure to myriad tax and process issues at this multinational organization and being part of a seasoned and tight-knit team that addressed these issues led to invaluable and formative experience. “I experienced first-hand the importance of tax controls and the benefits a tax department can reap from great processes.”

At Texas Instruments, Edupuganty has expanded her income tax role to include the tax technology function and oversight for the department. Specifically, she has sought automation opportunities to enable transparency among the various groups within the tax department “to minimize risk and reduce cycle time” and has overseen the implementation of various technology tools, such as Vantage Point, ONESOURCE Corporate Income Tax, ONESOURCE Workflow Manager and ONESOURCE DataFlow. As tax compliance director at Texas Instruments since 2008, she oversees the U.S. income tax compliance function for the international, federal, and state areas with activity in more than forty foreign jurisdictions and a team of ten direct reports. She routinely reviewed and filed for method changes on various tax issues that have resulted in cash tax refunds and savings.

Edupuganty is active in TEI as a vice chairwoman for the TEI Federal Tax Committee and as a member of the TEI Tax Technology Subcommittee. She is also a member of the Thomson Reuters Global Compliance and Reporting Innovation Advisory Board.

Married for almost thirty years with two grown daughters, she served on two separate boards of trusteeship for her children’s schools as well as had room mother roles. “Being involved with my children’s schools and activities when they were young was very important for me and them but was often a juggling act. My family has supported my career 100 percent, and my daughters appreciate the impact my career has had in how it shaped their outlook.”

“I enjoy change, which is why I specialized in tax.”
—Sandhya Edupuganty

Name: Sandhya Edupuganty
Title: Tax Compliance and Technology Director, Texas Instruments Inc.
Organizations: CPA, Beta Gamma Sigma, TEI Dallas Chapter
Birthplace: Andhra Pradesh, India
Education: St. Francis College in India (B.A. in accounting), University of Alabama (M.A. in tax)
Key Achievements: Identifying tax savings throughout my career from $200,000 to $150 million, as well as streamlining opportunities to mitigate risk and improve deliverables
Hobbies: Working out, dancing, traveling, meeting people
Fun Fact: I was born in India, came to the U.S. at age 6, and then went back to India for high school and an undergraduate degree. I appreciate the duality of cultural influences afforded by being raised in both the U.S. and India.