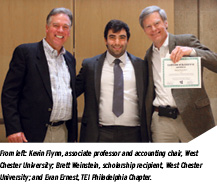 A highlight of the TEI Philadelphia and Harrisburg Chapters’ year is awarding scholarships to outstanding students from local universities. The two chapters pool their resources to maximize scholarship awards. In the just-ended 2018–2019 year, they awarded seven $2,000 scholarships.A scholarship candidate must be a junior or senior accounting or business major who is considering a career in the tax field. Candidates also must maintain a 3.0 GPA and demonstrate significant accomplishments, such as being named to an accounting honor society or earning an academic award.

Harbinson and Weinstein both noted that the scholarship would help them further their careers in tax. Harbinson’s interest in the tax field originated from her first federal income tax course. The professor made tax issues “come alive” by using real-life cases to explain material. Weinstein’s interest was sparked by his brother’s tax internship and federal taxation courses at WCU. Harbinson noted that the TEI scholarship recognizes her academic achievements and helps with her student debt load. Weinstein also said the scholarship will ease his debt load, and he expressed appreciation for TEI’s recognition of his academic accomplishments. Harbinson’s goal is to work for a large accounting firm and receive the CPA certification. Eventually, she hopes to return to school for a master’s degree in taxation and financial planning. Weinstein also wants to work for a large accounting firm with an ultimate goal to join and some day run his dad’s small CPA firm. During the awards ceremony, both Harbinson and Weinstein found it encouraging to hear that there also are jobs in corporate tax departments. In private as well as public accounting, they can find an interesting and fast-paced environment.

“We are very proud of our long-standing program and the exceptional candidates who receive TEI scholarships,” remarked Jibu Vergis, Philadelphia Chapter president.

Robert Ribblett, president of the Harrisburg Chapter, added, “We are happy to participate in this joint program that reaches so many deserving candidates year after year.” 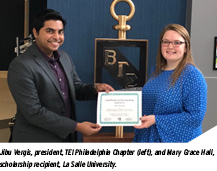