As children, we learned new and difficult concepts, such as our first words, by associating them with pictures. Who could forget the Dr. Seuss classic Hop on Pop? In this article, we take you back to your childhood by offering a series of pictures to simplify the most significant aspects of new Section 163(j),1 enacted as part of the Tax Cuts and Jobs Act (TCJA),2 and the recently proposed regulations thereunder.3 Each section includes a figure and an explanation. 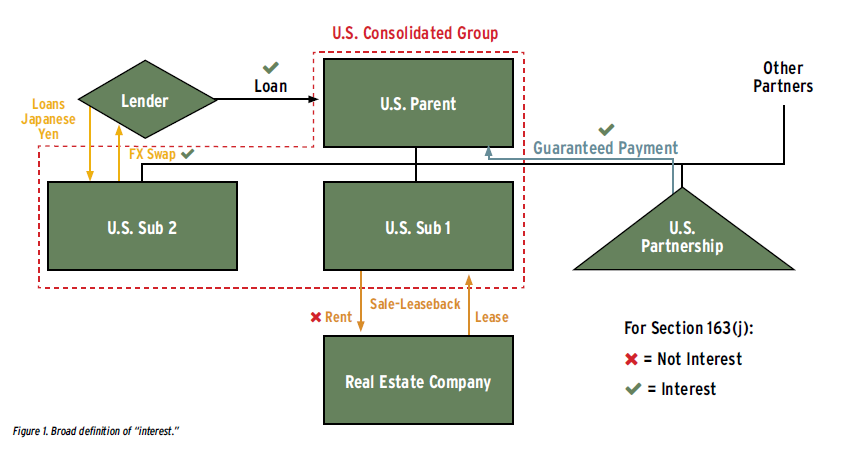 Taxpayers should be mindful of the broad definition of “interest” under the proposed regulations. In addition to interest on a debt instrument, the following are listed as examples of interest for the purposes of Section 163(j):

Furthermore, an anti-abuse rule provides that any expense or loss “predominantly incurred in consideration of the time value of money” in transactions in which the taxpayer secures the use of funds for certain time periods is considered interest.

As illustrated in Figure 1 and listed previously, amounts like guaranteed payments for the use of capital under Section 707(c) will be subject to Section 163(j) under the proposed regulations. On the other hand, rent paid under a true sale-leaseback and interest expense capitalized into the basis of assets under Sections 263A and 263(g) will not be treated as interest expense. In view of this broad definition of interest, taxpayers now must examine closely all costs associated with borrowing and hedging and any business income that may produce “interest.” 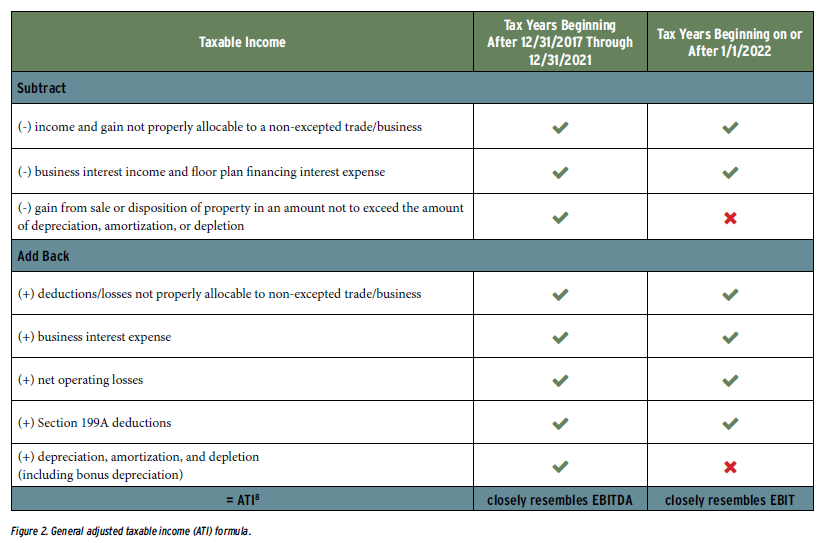 In comparison to partnerships and non-U.S. entities, the Section 163(j) rules applicable to C corporations and consolidated groups are relatively straightforward. All interest paid or received by a C corporation will be treated as business interest expense or interest income for the purposes of Section 163(j), even if attributable to investment activities. Thus, in Figure 3, all of U.S. Parent’s interest expense on Loan A will be subject to Section 163(j), and all of its interest income, just like other items of income, gain, deduction, or loss (including such items earned or incurred through a U.S./Foreign Branch), will be taken into account in determining its ATI, except to the extent that such items are properly allocable to an excepted trade or business (discussed in more detail in the Allocating Between Excepted and Non-Excepted Trades or Businesses section and Figure 7, both on page 29). With all of a C corporation’s interest paid or received treated as attributable to a trade or business, a C corporation (like U.S. Parent) should evaluate whether financing activities related to investments are adversely affecting its Section 163(j) limitation.

If, for any tax year, a C corporation or a consolidated group (like U.S. Parent or U.S. Consolidated Group) has business interest expense not allowed as a deduction as a result of the Section 163(j) limitation (a DBIC), such DBICs will be carried forward indefinitely for possible use in subsequent tax years. As with all carryforwards, taxpayers must keep close track of their DBICs.10 The future value of these DBICs, however, is speculative at best, because they and all other carryforwards share the same problem—a taxpayer must enjoy an economic change or a shift in a capital structure before the carryforward can be used. Because many taxpayers’ business interest expenses remain relatively constant from year to year, absent a change in taxable income, it is possible that DBICs may never be utilized.

In the context of mergers and acquisitions, a seller may consider its subsidiary’s DBICs as “tax attributes” for which the seller should be paid. A buyer, on the other hand, should model whether its group can utilize such DBICs in the first few post-closing tax years before agreeing to pay anything for the DBICs.11

Figure 4 offers an example of the impact (and complications) of these Section 163(j) rules for partnerships and is further discussed here. 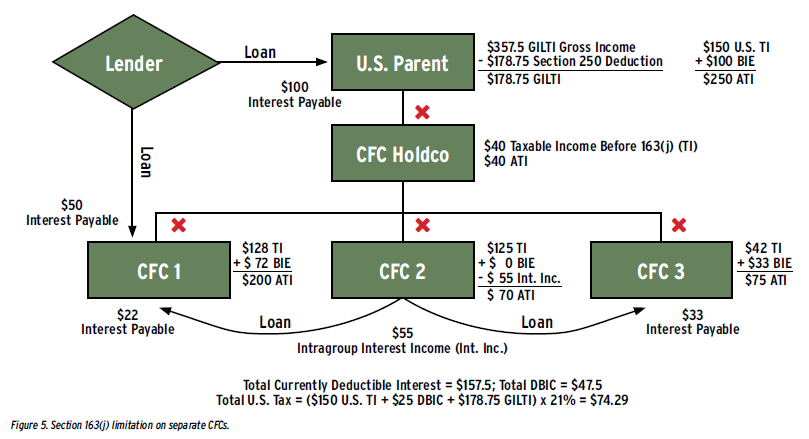 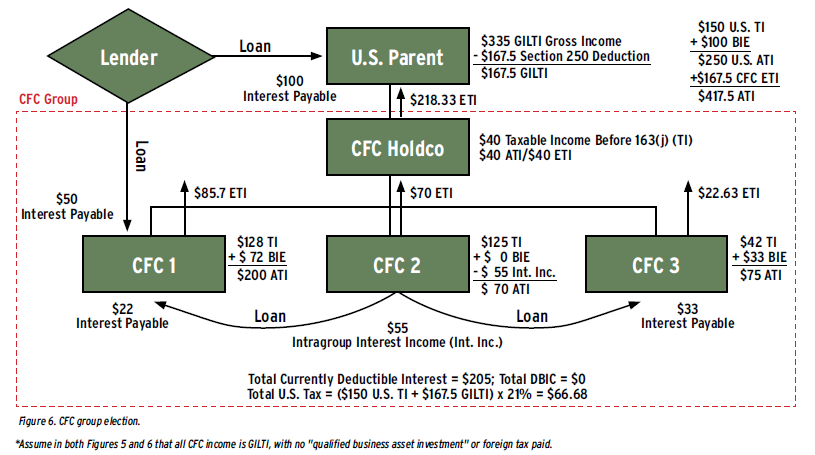 To mitigate the impact of the Section 163(j) limitation on intra-CFC loans, a group of qualifying CFCs may make an “alternative method” election, the CFC group election. The CFC group election is available only if a group of two or more CFCs is eighty percent or more owned by value (vote is irrelevant) by the same U.S. shareholder or by multiple related U.S. shareholders in the same proportion (the CFC group). Partnerships that are wholly owned by CFCs in the same CFC group are also treated as CFCs for that purpose. Any CFC that has any ECI cannot be a CFC group member.

A CFC group election is irrevocable and must be consistently applied to all CFCs, including any subsequently acquired CFCs. The CFC group election appears to be generally beneficial for U.S.-parented multinationals that rely on intercompany lending between CFCs and charge intercompany interest with a markup and/or if borrowing is concentrated either at higher-tier CFCs or at the U.S. shareholder level.

In calculating CFC ETI, amounts roll up from the lowest tier to highest tier. Because all CFCs have separate company CFC ETI, all such CFC ETI is included in the calculation of the roll-up. CFC 1’s ETI is $85.70 = $200 of ATI multiplied by [($200 of ATI multiplied by thirty percent, or $60, minus $34.29 of allocable net interest expense) divided by $60]. CFC 3’s ETI is $22.63 = $75 of ATI multiplied by [($22.50 minus $15.71) divided by $22.50]. Because neither CFC 2 nor CFC Holdco has interest expense, all of their ATI constitutes CFC ETI. CFC Holdco must apply the “specified ETI ratio” to the total CFC group members’ CFC ETI. Because the GILTI inclusions equal taxable income of the CFC group members, the ratio is 100 percent.

Allocating Between Excepted and Non-Excepted Trades or Businesses16 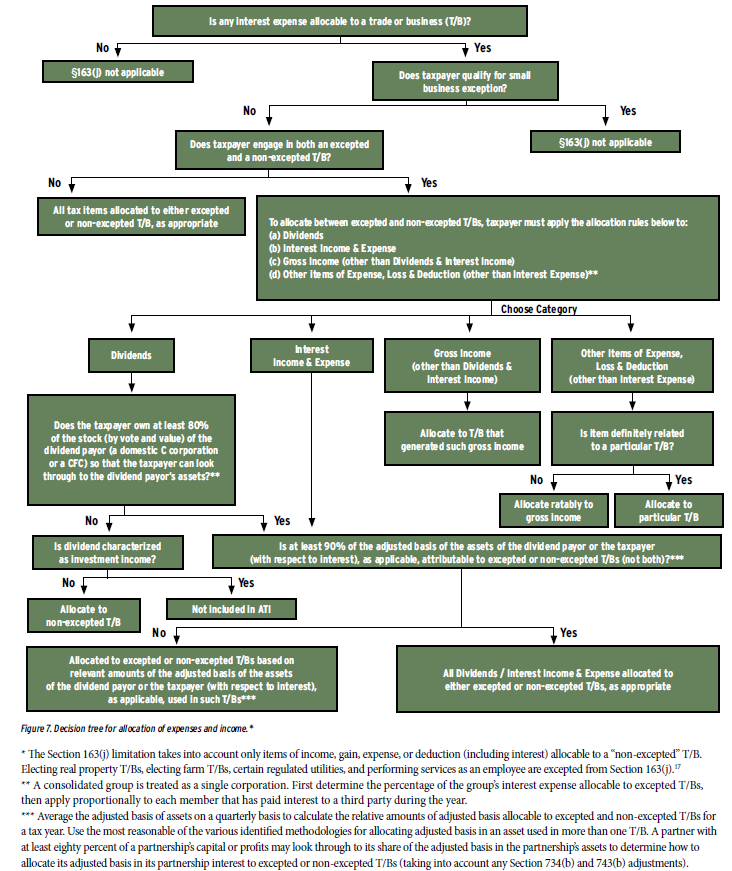 Diana S. Doyle and Samuel R. Weiner are partners and Christopher J. Ohlgart is an associate at Latham & Watkins.