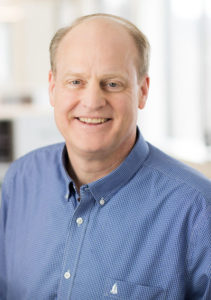 When Michael Bernard was a sophomore at Creighton University, he took a business law class. It was the start of something big—a notable career in tax, including almost three decades at Microsoft Corporation. He is now the chief tax officer at Vertex Inc.

“The cases in the book covered a number of topic areas—antitrust, SEC, contracts, torts, and tax,” Bernard says. “Our most interesting discussions in the class were the tax cases. The professor who taught the class also lectured the upper-level tax classes. I took those my junior year and decided this is the area I wanted to practice in, which eventually led me to law school.”

Bernard, who recently left Microsoft to become the chief tax officer of transaction taxes for Vertex Inc. in King of Prussia, Pennsylvania, is excited about his new position. “My role is nationwide and across many industries,” he explains. “The role is unique, because my focus is to work with the corporate tax department (almost all of them TEI members) and develop the best technology and reporting capabilities for them. This is something that I did the last seven years at Microsoft, so I am really looking forward to this new opportunity to help fellow tax professionals understand how technology can be the key to tackling tax data management challenges.”

Bernard saw Microsoft mature into one of the most potent forces in business today: “When I joined in 1990. Microsoft had 5,000 employees and top-line revenues of $800 million. Today the company has 90,000 employees and $90 billion in revenues. That was a significant amount of growth to manage through. We had some great products, and we also released some products that did not meet our customers’ needs. I think the number-one strength through all the years was to be able to look back at our successes and failures and be steadfast in our commitment to learn from all of our experiences. That continues today. I would say that Microsoft is more collaborative these days in working with competing technology organizations. That is an adjustment that was necessary to the company’s continued success.”

What were the best parts of working for Microsoft? “Besides the breadth of tax issues, I would say the two-hour, in-person quarterly meetings that our leadership had with our founder, Bill Gates, and our president, Steve Ballmer. Those meetings were really about our product strategy and how everyone, no matter their role, was accountable to making Microsoft the best in the industry. Both of them had a tremendous passion for the software industry. These discussions included the Microsoft vision and where the technology was headed. A lot of what they talked about came true. When both of them decided to leave the company, that was tough for me, because I knew the company would be much different without them. Both of them worked incredibly hard to make Microsoft a world-class company,” Bernard explains.

Bernard’s tenure at Microsoft was both challenging and rewarding. “I was so fortunate to have been given the opportunity to lead teams in many functional areas: tax controversy, direct and indirect reporting, tax accounting, federal and state tax policy, property tax, tax technology, tax benefits, and telecom. I had highly competent colleagues at Microsoft that I had the honor to work with every day. Believe me, they are the best,” Bernard asserts.

In addition, Bernard points out, when he started at Microsoft in 1990, many rules for the taxation of software had not yet been fully devised. “Seeing that evolution over the last twenty-five-plus years has been really fascinating,” he notes.

Bernard juggled a multitude of situations at Microsoft, requiring him to balance many priorities. His secret to success? “I think the most important decisions I ever made as a tax executive came from hiring the best tax professionals. We kept it all going by being dedicated to one another, utilizing the best talents from each person, valuing and respecting their opinion, being committed to each person’s professional growth, and working as a team for a common and defined outcome,” he says. “Sure, we had some hectic times while the company was growing, but we always had fun along the way.”

For Bernard, a key moment came about seven years ago, when he started leading an effort to develop an overall IT tax infrastructure plan. To that point, the tax department implemented IT solutions as needed. “Through the efforts of some great work by our indirect tax leaders and IT professionals,” he says, “we were able to develop solutions that improved the tax department’s reporting capability and, more importantly, became the backbone of our cloud business. I really cannot overstate the significance of working to provide technology solutions at Microsoft. For the first time in my career, I was actively involved in shaping the IT needs of the tax department. It was both a strategic and creative learning experience.”

“When I joined in 1990, Microsoft had 5,000 employees and top-line revenues of $800 million. Today, the company has 90,000 employees and $90 billion in revenues. That was a significant amount of growth to manage through.”
—Michael Bernard

Before working at Microsoft, Bernard clerked for a year at the Nebraska Supreme Court. “What I discovered was that my recommendation to the judge on how a case should be decided was very impactful to the litigants—you really had to look at the law and the factual and procedural record from the lower court,” Bernard says. “I also had tax roles in two other large companies (besides Microsoft) and public accounting. I came to learn the business and tax risks in the financial services, trucking, railroad, and construction industries.”

Back on the Farm

When not immersed in tax issues, Bernard retreats to his farm in Nebraska, which grows corn and soybeans. “I worked on our family farms as a teenager, and that always was a goal of mine, to be able to be in farming later in life. I just feel very fortunate to have achieved that. There is a natural rhythm to farming—summer, fall, winter, and spring—that is so wonderful to behold,” he says.

TEI holds a special place in Bernard’s career: “I really owe a lot to TEI. My professional network centers around TEI. I know so many members from across the country and industries that have given me such valuable professional advice through the years. I have worked many times through TEI to achieve better tax administration and policy outcomes for Microsoft. I have also had the pleasure to work with three executive directors: Mike Murphy, Tim McCormally, and Eli Dicker, along with incredibly talented lawyers and staff at TEI. Anytime I called or sent email about a tax issue or an administrative matter, I always received prompt attention and support,” Bernard notes.

“I also want to thank my mentor and former superior, Mike Boyle [former corporate vice president of tax and audit at Microsoft and TEI’s former international president] for bringing me to Microsoft and for insisting that I become involved in TEI. I especially thank my spouse Mary and our daughters, Caroline and Katherine, for having supported me during my years at TEI.”

Things to Know About … Michael Bernard