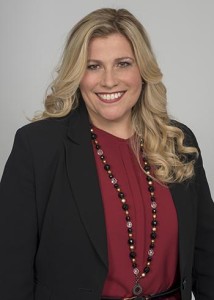 When Martina Krummen joined KPMG for her internship, she was transferred for three months to the indirect tax department for a special project. During this time, she traveled across Canada and the United States for a major client of the firm to identify sales tax opportunities for their various business units. It turned out to be an inspiring experience for Krummen, ultimately leading to her current position—interim vice president/director of taxation at SNC-Lavalin Group Inc.

“This project was rewarding in so many ways, but what I liked best was the contact with the client and the way we all felt when opportunities were discovered. Not only did we identify significant refunds, but we also focused on systems and process improvements to ensure tax compliance obligations were met, as this was equally important,” Krummen explains.

After this exciting project, Krummen returned to the audit team, but, as she puts it, “I left my heart in tax!” Krummen ended up joining the KMPG indirect tax department in 1991 when the Canadian goods and services tax (GST) was introduced. “Helping clients of the firm implement a new tax, figuring out the new rules, and dealing with tax authorities to iron out issues was challenging and rewarding,” she says.

Working at a Big Four firm in the early stages of her career was important, she says, because you “work with the best in the business.” The technical skills you acquire and the work ethic you develop are invaluable, she notes. “As a consultant, your role is mostly to give advice. The client makes the decision and implements the recommendations. So the client drives the bus, and the consultants are along for the ride. I knew very early on in my career that I wanted to drive the bus,” she explains. When Krummen was presented with an opportunity to join the Air Canada tax department in 1995, she jumped on it. “I stayed with the airline for 13 wonderful years. I started as a manager in the indirect tax department and ended up leading the tax group. I helped the airline though an important merger, a bankruptcy protection filing, and several corporate restructurings and divestitures.”

Krummen joined the SNC-Lavalin tax department in 2008. The company is one of the leading engineering and construction groups in the world and a major player in the ownership of infrastructure. With offices in more than 50 countries, its teams provide engineering, procurement, construction, and construction management services to clients in a variety of industry sectors, including oil and gas, mining and metallurgy, and infrastructure and power. Krummen’s first assignment was to build a strong indirect tax team. “My role has since changed significantly, and I now lead a team of 14 gifted tax professionals. I am responsible for global tax risk management, global compliance, reporting, and managing tax audits,” she notes with enthusiasm.

“As a consultant, your role is mostly to give advice. The client makes the decision and implements the recommendations. So the client drives the bus, and the consultants are along for the ride. I knew very early on in my career that I wanted to drive the bus.”
— Martina Krummen

One of the biggest challenges Krummen has faced has been managing tax audits around the globe. Here’s how she explains it: “Audits in Canada, the United States, and Europe can be challenging, but you generally know what to expect and are well equipped to handle any issues that arise. Over the last three years, I had the opportunity to travel and to meet with representatives of foreign tax authorities to resolve audit issues the company was faced with. These travels took me to some of the poorest countries in the world which are in desperate need of funds.” As a result, she notes, tax assessments for large multinationals can be overstated and occasionally without technical merit. In those countries, tax codes are less sophisticated, and auditors may allude to improper methods of resolving audit disputes. “Settling these disputes, while adhering to the highest ethical standards and paying the proper amount of taxes due can be a lengthy process but is totally achievable,” she explains.

Krummen specifically recalls trying to make a tax payment in a North African country. “Our local advisers informed us of the high risk of collusion and corruption and recommended special cash transfer procedures to ensure that the funds actually reached government coffers. This was a somewhat lengthy process that resulted in additional penalties. I had difficulties in understanding how something as basic as making a tax payment could become so complex and time-consuming. I think these countries are in desperate need of help and would benefit greatly from enhanced taxation systems and automated tax collection and remittance systems,” she says.

The Benefits of TEI

Krummen urges TEI members to get involved in TEI leadership and to actively contribute to technical committees. She has served on TEI boards, chaired technical committees, and was the TEI vice president for Canada in 2006–07. She says that the relationships you build with the TEI leadership team, colleagues in industry, and government officials are invaluable. “It will be of great benefit to you personally as well as to your employers. I can honestly say that I would not have been able to achieve all that I have done without my involvement with TEI in the early stages of my career,” she says. “Through my involvement on numerous TEI committees, I have had the opportunity to work with government officials on emerging tax issues with a view toward developing innovative solutions that worked for both governments and taxpayers and contributed to a better tax system. These experiences have served and continue to serve me well in my dealings with government representatives and in settling audit disputes by arriving at mutually agreeable solutions for the company and tax authorities.

Getting to Know … Martina Krummen

Krummen is working on an exciting project currently under review by Québec, Canada, tax authorities. She offered Tax Executive some insight into her team, the scope of the project, and what it could accomplish for Canadian taxpayers.

I am working on this project with four other exceptional women. One is a TEI member, and one is a former TEI member. I am referring to Denise Deriger and Natalie St-Pierre, respectively. Together, we have founded the Tax Mediation Association. We have proposed an 18-month pilot project to the Québec tax authorities that is currently under review. We have also presented the idea at the federal level, to the Organisation for Economic Cooperation and Development, and to Nina Olson, the taxpayers’ rights advocate in the United States.

Tax mediation is a process of prevention and settlement of tax disputes involving the use of an independent mediator. The mediator helps the parties reach a common understanding of the issues and guides the parties with a goal of reaching a mutually satisfactory settlement that complies with applicable tax legislation. This innovative proposal would benefit taxpayers, especially small and medium businesses that do not have the same resources as TEI members, as well as tax authorities.

We believe the mediation process should be introduced at the audit level, before an assessment is actually issued. Resolving disputes in the early stages achieves efficiencies and cost savings for both parties by avoiding lengthy oppositions, appeals, and court proceedings. It also has the benefit of fostering a more collaborative approach between tax authorities and taxpayers. We believe that certain retired TEI members would make excellent tax mediators. We encourage you to contact us to learn more about this project and to share some of your personal experiences with us.