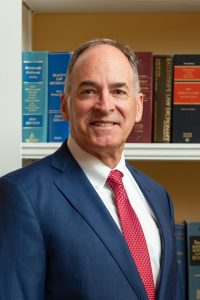 Marcus Shore was working at a law firm when a partner suggested that he work with a couple of tax attorneys at the firm. It turned out to be a good suggestion. “I enjoyed the tax work enough that I soon made the decision to focus on tax and make use of my undergraduate degree in accounting, ultimately pursuing an LL.M. in taxation to expand my knowledge of tax. It was the right decision for me. I have thoroughly enjoyed the many issues and transactions I have worked on over the course of my career with several Fortune 500 companies,” says Shore, now senior tax consultant at Dominion Energy Inc.

Shore began working at Dominion Energy in March. “I left Ernst & Young at the end of last year, thinking it was time to move on from the tax outsourcing arrangement that EY had taken on when the company where I had worked as the director of federal tax for eleven years outsourced their tax department and moved forty-five of us over to EY,” he says. “When I left EY, I wasn’t ready to retire, so I applied for a tax position at Dominion. The timing just happened to work out.”

What’s the most interesting tax issue Shore has worked on at Dominion Energy so far? “Dominion Energy has been working on building an offshore wind farm that will be very large and located more than thirty miles off the Virginia coast,” Shore explains. “Building a wind farm offshore is far more challenging and takes considerably longer than building one onshore. It has been personally rewarding to work with the project team to help plan development of the project to ensure that it qualifies for the Section 48 energy credit, that is, the investment tax credit, which will help the project’s economics and benefit the customers the project will ultimately serve.”

In general, Shore notes, tax is inherently a technical field. “It can be intimidating and [can] lead a person to avoid certain areas or issues they may not feel comfortable with. I have felt that discomfort many times over the course of my career as issues have come up that I was not familiar with,” he says. “However, I have learned over the years that lack of knowledge is not a reason to avoid digging into new issues or areas of tax. It is important to be willing to learn areas of tax that we may not know anything about or be fully comfortable in, so that we grow and build our knowledge base on tax issues and topics.”

For Shore, it’s all about personal responsibility. “Because of the dynamic nature of tax, with its changing laws, regulations, and interpretations, it is important that we continually work to improve our knowledge base rather than just relying on what we learned in the past. We also have to actively work to improve how we communicate with others on tax matters,” he says.

“Education through courses or seminars, self-study, review of articles, work experience, [and] joining and getting active in TEI are all ways we can grow in our field,” he explains. Along with taking personal responsibility for our development, Shore adds, “I’d say that I have learned the importance of persistence, of not giving up. Success or growth may not come easy, but if we are persistent in working to develop ourselves, it will come. The story of the hare and the tortoise is a good example that illustrates the importance of persistence.”

Speaking of TEI, Shore says the organization has been rewarding for him on multiple levels. “The friendships and connections I’ve made over the years of my membership have been long-lasting. Attending continuing education seminars has helped increase my awareness of tax rules and opportunities, as has discussing topics with some of the people I’ve met at TEI conferences and meetings. But more importantly, I have found the greatest personal reward has come from the opportunity TEI has given me to get involved in the operation of the organization. By volunteering to help plan meetings and later getting involved in chapter and Institute leadership positions, I have enjoyed getting to know members of the organization and tax community, helping TEI meet its education and advocacy mission, and giving some of my time to the tax profession, which has given me so much.” Shore has received two meritorious service awards for his many years of volunteer work with the Carolinas Chapter of TEI.

What does Shore regard as his greatest accomplishment? “My greatest personal accomplishment has to be in helping my wife raise our two kids. While my wife deserves the most recognition for being the driver and glue that has helped them grow into accomplished young adults, I like to think that my steady involvement with them over the years has contributed in shaping them into the young adults they have become.

“Professionally,” Shore says, “my greatest accomplishments have come in the area of audit defense and advocacy. On audit defense, I think my greatest accomplishment was defending the worldwide restructuring that Reynolds American had done in the 1990s when they were part of RJR Nabisco and had implemented the use of an intangible holding company, as well as commissionaire and contract manufacturing arrangements to drive down their effective tax rate. That experience gave me the opportunity to see how taxing authorities reacted to different tax-saving strategies and to travel to many countries around the world as audit issues arose. The experience also helped make me a better tax planner when I worked to help plan their reentry into foreign markets in Europe and Asia eighteen months after they sold off their international operations. In the advocacy area, my biggest accomplishment was in publishing an article challenging the IRS position that AMT refunds were subject to sequestration and then in advocating for a change in the tax policy. I worked with a colleague to publish a tax article on the issue, then later met with the IRS and Treasury officials and worked with an industry group to urge Treasury to reconsider the position. Through our collective efforts, we were ultimately able to persuade the IRS to reverse their position on sequestration, which avoided the loss of tens of millions of dollars in AMT refunds for the company I was with at the time.”

When not immersed in tax issues, Shore has several outside interests. “I play golf year-round and get together with a couple of Europeans I met through work twenty years ago for a few rounds once or twice a year, alternating between the US and Europe. Another interest is running; I’ve done a handful of marathons and more than thirty half-marathons. In terms of hobbies, I’ve been involved in amateur wine making for more than thirty years, first as part of a wine-making group (started when I lived in California), and over the last five years making small batches of my own wine. Reds only.”

Shore graduated from Miami University in Ohio and is a devoted fan of Redhawks football and hockey. “Being a sports fan of a school that is not a sports powerhouse is different than it is for fans at schools with major programs. There are simply fewer opportunities to follow your team and favorite sports where the school focus is not so much on sports. However, cable TV and the internet now make it easier to catch games than in years past. And every once in a while, an athlete like a Ben Roethlisberger comes along who is a standout and who gives us someone to cheer for at the pro level,” he says.

Things to Know About Marcus Shore