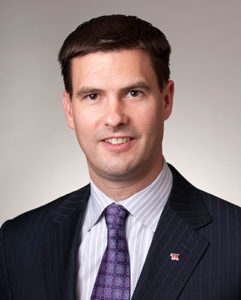 You’ve heard that expression before. For Fraser Reid, vice president, taxation, at Teekay Shipping (Canada) Ltd., it was a turning point in his career.

Here’s how Reid explains it: “When I was completing my thirty months of articling for my chartered accountant (CA) designation in the 1990s, there used to be a requirement to complete a significant number of audit hours. Often when on a large company audit, there would be a complex organizational structure for the client’s business, and when you asked questions around the office hoping to better understand the structure and related transactions, the response was typically, ‘It’s for tax reasons.’ I wanted to really understand what drove the rationale for these structures—especially for cross-border business transactions. I thought it was a way to add value to both myself as a professional as well as to potential clients. That’s when I decided to pursue training in international tax.”

Reid finds several aspects of corporate tax law interesting, including tax treaty interpretation, but atop his list is how a specific word in “black-letter law” may have a deep, below-the-surface meaning that requires a tax specialist to understand both the context from the perspective of the drafting of the particular area of law as well as how the word has been historically interpreted in previous jurisprudence. “Occasionally,” Reid explains, “this can play a significant factor in assessing the tax position of a business transaction that is within the purview of this specific tax law.”

What’s the most problematic tax law problem Reid has encountered in his career? “One very challenging area is anti-avoidance rules—especially if you’re assessing a transaction that has both bona fide commercial reasons as well as a tax benefit attached to it. Knowing where the fine line in the sand might be on when a transaction facing these circumstances is likely to be OK from a tax perspective as opposed to when it could be viewed as tax-motivated can be a tricky concept to accurately assess,” he says.

The corporate tax area always holds surprises. For Reid, the biggest has been how quickly the OECD BEPS initiatives are getting traction since the guidance was released in 2013 and how rapidly various jurisdictions are implementing these concepts in their respective domestic tax laws. “Although tax practitioners were aware of the fundamental concepts well before BEPS was introduced in 2013,” he notes, “the speed at which the initiatives have been gaining pretty much widespread acceptance has been a big surprise, and it is having a major impact on our role as tax professionals.”

Prior to coming to Teekay, Reid had stints at Ernst & Young and BDO Dunwoody, which, he says, prepared him well for his current position. “An invaluable aspect of articling with a midsize firm like BDO,” he says, “was that with the smaller clients you had the responsibility of handling the entire balance sheet, income statement, and corporate tax return preparation so you got to see the entire picture and gained intimate experience with key drivers to the financial statements as well as a lot of exposure to the tax aspects. My time at EY exposed me to larger clients and allowed me to get introduced to some basic international tax concepts, which helped open the door to the opportunity of starting a tax function at Teekay.”

“Although tax practitioners were aware of the fundamental concepts well before BEPS was introduced in 2013, the speed at which the nitiatives have been gaining pretty much widespread acceptance has been a big surprise, and it is having a major impact on our role as tax professionals.”

Teekay has grown significantly since Reid started working for the company in 2002, he notes. “It has been exciting to be a part of the growth and be exposed to acquisition transactions, new project tender submissions, and spinning off business segments to separate publicly traded vehicles,” Reid says.

His greatest accomplishment at Teekay? “That would probably be in 2005, when I was working with colleagues and external advisors to spin off our LNG transport business to a separate NYSE publicly traded vehicle. At the time, this was the first business that had activity conducted almost exclusively outside of the United States with all foreign entities to form a publicly traded U.S. master limited partnership, or MLP.”

Reid appreciates his association with TEI, noting that it is “a great way to obtain professional development training and keep on top of evolving tax trends as well as providing a platform to lobby key tax considerations.” He adds, “However, the most rewarding aspect that I’ve experienced during my time with TEI has been meeting other talented in-house tax professionals and realizing that despite being in different industries, most of us have so much in common in what we do day-to-day and the challenges we face.”

When not immersed in tax issues, what are his side interests? Reid describes himself as a “truly West Coast Canadian boy,” so, not surprisingly, he loves ice hockey and downhill skiing. In the summer, Reid puts away the skates and skis and brings out his golf clubs.

But those are not the only sports Reid has played. Check this out: “Back in my early twenties I used to recreational-box at a gym in East [Vancouver]. On a few occasions, I was asked to spar a guy that I subsequently found out was George Jerome. George Jerome fought George Chuvalo for the Canadian heavyweight championship in the late 1970s, and Chuvalo fought Muhammad Ali twice (including a fight in 1966 in which Chuvalo became the first heavyweight fighter to go the full fifteen-round distance with Ali). It was incredible to learn in the ring from a guy that had this connection to boxing history!”

Things to Know About … Fraser Reid