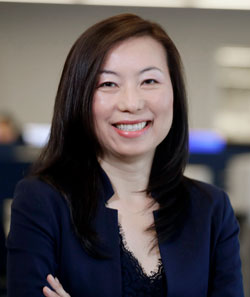 For Susanna Yoo, tax law isn’t just what’s written in the Internal Revenue Code or the implementing regulations. Tax law can also be dynamic in its application and interpretation. “The same black and white words in the tax law may apply differently, depending on the facts and circumstance of the particular situation or case,” Yoo explains.

Yoo, vice president of tax at Allegiant Travel Company, first became interested in tax issues as a student in John Zimmerman’s federal taxation class at the University of Nevada, Las Vegas. “There were tax consequences in the most obscure stories Professor Zimmerman shared with the class, and I just had so much fun thinking through the tax considerations,” Yoo notes.

What, according to Yoo, are the best parts of working for Allegiant? It’s the “flight benefits,” she says (no doubt smiling). “Realistically, working for folks who trust and support you to do the right thing. You learn about tone at the top at school, but when you actually interact with a management team who wants to do the right thing, it is really encouraging and motivating,” she says.

When it comes to the recent tax reform legislation, Yoo has this take: “As a cash taxpayer, the reduction in corporate tax rate and bonus depreciation provision have been extremely beneficial for the company. However, the new tax reform legislation created unintended tax consequences that may result in recognizing an uncertain tax position, unless technical corrections are issued soon.”

Prior to Allegiant, Yoo had stints at Harrah’s Entertainment Inc. (now Caesars Entertainment Corporation) and Ernst & Young. Her takeaway from those experiences: “To not be afraid of challenges and to push yourself to the limit to realize the endless possibilities and rewards of the profession.”

When it comes to her greatest accomplishment, she points to the connection between work and family: “I had two kids in elementary school and was working full-time at a law firm when my family and I decided that I would go back to school for an accounting degree. This single decision resulted in a lot of sacrifices, but ultimately changed our lives for the better. I found a passion for tax and tremendous opportunities in this field.”

Yoo greatly values her connection to TEI. “TEI is always there for tax professionals, if they need help with a problem or need to network to help find answers,” she says. “Starting a new tax department can be a daunting task, but I was able to use TEI connections, with its vast network of tax executives who were and always have been willing and able to share their experiences and best practices. This provided me with a tremendous amount of comfort and confidence.”

When not immersed with tax issues, Yoo enjoys going to musicals and operas. Some of her recent favorites include Hamilton, Something Rotten!, and Madama Butterfly.

Things to Know About … Susanna Yoo