As recently recognized by Tax Analysts, the Multistate Tax Commission (MTC) has been gaining in prominence and, arguably, effectiveness.1 One of the MTC’s several activities is to administer audits on behalf of states. The MTC’s Joint Audit Program (Audit Program) is authorized by the Multistate Tax Compact and was initiated in 1971.2 The MTC does not have the authority to assess tax. Rather, following an audit the MTC transmits its audit report and proposed adjustments to participating states. Over the last three years, the Audit Program has recommended state tax assessments in excess of $45 million annually.

The Audit Program includes the MTC’s Compact members, Sovereignty members, and Associate/Project members.3 Currently, of the twenty-eight member states in the Audit Program, twenty-seven participate in the MTC’s Income and Franchise Tax Joint Audit Program, and seventeen participate in the MTC’s Sales and Use Tax Joint Audit Program.4 The MTC has developed audit manuals, for both income tax and sales tax, which set forth the procedures that MTC auditors follow when performing a multistate joint audit on behalf of the states. These audit manuals are publicly available.5

Because a single MTC audit is intended to take the place of separate and duplicative audits, it provides economies of scale to the states. The Audit Program is also intended to promote uniformity among states with similar laws and regulations and to provide states with expertise on new issues and business practices. However, unique challenges arise with an MTC audit. For instance, the notion of state tax uniformity is aspirational at best, in that states that adopt identical tax provisions often interpret them differently. 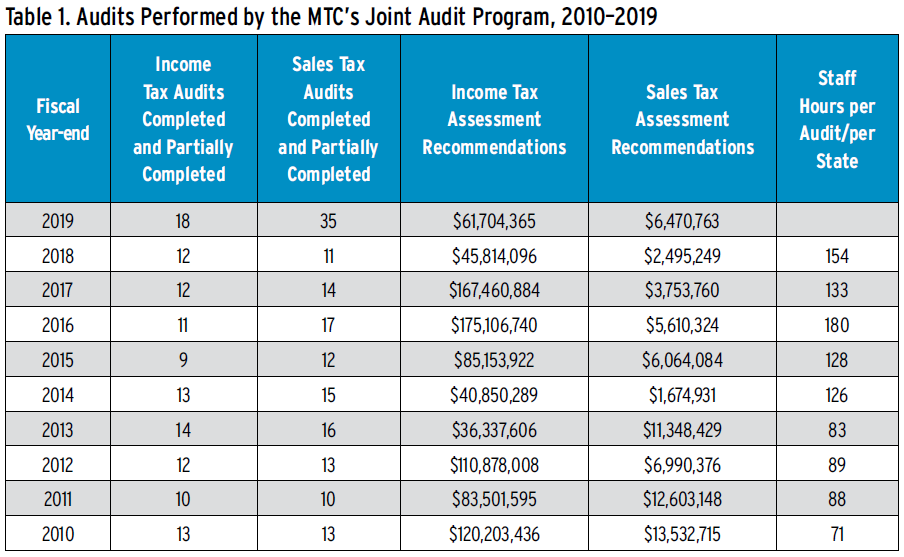 For fiscal year 2019 alone, the Audit Program completed or partially completed 18 corporate income tax audits and 35 sales tax audits.8 As Table 1 shows, this uptick indicates that the number of audits completed each year is rising, with 2019 being an especially busy year for the Audit Program.

Interestingly, despite advances in technology and the MTC’s use of electronic records, the Audit Program has actually increased the time spent doing its audit work in the past two decades. For example, in 2000 an MTC audit required sixty-three hours of staff time per audit per state.12 By 2018, that number had grown to 154 hours of staff time per audit per state.13 A number of reasons may explain this increase, including the increase in the number of states participating, the rise of combined reporting (and the challenges of auditing a unitary group), and more frequent and disparate state tax law changes.

The MTC’s Audit Committee consists of representatives of member states’ tax agencies. The Committee is responsible for MTC audit selection and overseeing the audit program.14 The audit selection process begins every July, when the MTC Audit Director distributes audit nomination forms to the states. A state may nominate up to two lucky candidates for audit by the MTC, and the nomination form must describe the reasons for the nomination. The MTC provides that the state should consider certain criteria when nominating a taxpayer:

The MTC provides that even though no company will meet all criteria, a nominated company should meet criteria 1 and 2 unless there is a reason the MTC should make an exception.15

Every September, the states return their audit nomination forms to the MTC. In November, the MTC’s Audit Director distributes to the states a summary of the taxpayers nominated for audit, and by February the states supply additional information concerning the audit candidates and reasons for MTC audit selection. Finally, in March the states vote to select the MTC audit inventory for the relevant year.16 When voting on the nominations, each state indicates whether 1) the state will participate in the audit, and the taxpayer is a high priority for the state; 2) the state will likely participate, but the taxpayer is not a high priority; or 3) the state will likely not participate in the audit.17 In addition to this nomination process, the MTC National Nexus Program can refer audits to the MTC, or a taxpayer can voluntarily request an MTC audit.18

Interestingly, the MTC divulges neither which companies it has selected for audit nor which companies each state has nominated. Taxpayers selected for audit are often frustrated, because they are not provided a justification for their selection. For this reason, we believe a taxpayer should be given the opportunity to make a case for why its being subject to an MTC audit may or may not make sense.

Following the vote and selection of the audit inventory, the Audit Director assigns MTC auditors to the inventory, the states decide whether to formally participate in the selected audits, and the auditors contact the taxpayers to start the audit process.19 Once assigned, each auditor will review the audit nomination forms and the states’ reasoning for nominating that taxpayer.20

Before an MTC audit commences, a taxpayer should consider working with the MTC audit team to develop a written audit plan that sets forth the ground rules of the audit, including dates for field work, timing of responses to information and document requests, expected dates to conclude the audit and deliver the MTC’s recommended audit results to the taxpayer, method of delivering information and documentation to the auditor, and policies concerning waivers of statutes of limitations. As part of the audit plan, the taxpayer should also consider requesting that the MTC confirm the list of states participating in the audit and the years covered by the audit.

Authority for States to Participate in MTC Audits

Taxpayers should also consider whether a revenue agency participating in an MTC audit has authority to do so. Previously, taxpayers have unsuccessfully challenged the constitutionality of the MTC’s audit activities and unsuccessfully challenged the ability of a Compact member state to participate in an MTC audit pursuant to the state’s compact adoption or other state authority.21 The Compact member states have enacted into state law the language of the Multistate Tax Compact, including Article VIII, which authorizes the MTC to conduct an audit.22 However, Article VIII “shall be in force only in those party states that specifically provide therefore by statute.”23

Although only sixteen Compact member states have adopted the Compact,24 twenty-seven income tax audit member states participate in MTC audits.25 Some states’ laws provide that a state administrative agency cannot delegate its authority unless there is statutory authority for such delegation.26 Thus, the taxpayer should consider whether certain states have the requisite statutory authority to participate in MTC audits.

Responding to Information and Documentation Requests

Ultimately, if a taxpayer fails to respond, the MTC has authority under the Multistate Tax Compact to issue a subpoena.30 However, generally a state participating in the MTC audit, rather than the MTC itself, will issue a subpoena. It has been our experience that taxpayers and the MTC can work out mutually agreeable resolutions to disputes over information requested by MTC auditors; however, we believe there will be more frequent use of subpoenas in the context of MTC audits. Our expectation is premised on the increased complexity of multistate audits, the increase in the number of states participating in a given audit, the types of information requested during MTC audits, and an overall sense that MTC auditors have become more comfortable pursuing positions that taxpayers view as aggressive.

In addition to the frequency of subpoenas, we note that a subpoena issued by a state participating in an MTC audit that seeks information that does not relate to that state’s tax return (e.g., information related to a unitary combined report sought by a state that does not allow combined reporting) is an inappropriate use of a subpoena by that state. Taxpayers should consider exploring their rights administratively or judicially when determining whether to comply with an overly broad subpoena.

The Multistate Tax Compact permits the MTC to examine the books, papers, records, and other documents of a taxpayer, but the Compact and audit manuals do not specifically address the types of documents, data, and information a taxpayer must maintain and provide.31 Also, the Compact and the manuals do not obligate the taxpayer to create documents or produce data that does not already exist; rather, the taxpayer is required to produce only those items contained in its existing books and records. Thus, when the MTC requests items a taxpayer does not have, the taxpayer can respond that such documents do not exist and can provide a written explanation for why it has no such records.

For example, the MTC routinely asks the taxpayer for apportionment schedules for every state where the taxpayer is taxable. The MTC generally expects that taxpayers maintain fifty-state data and are able to provide such documentation to the auditor. However, depending on the size and complexity of a business, its number of business groups, and its different accounting systems, a taxpayer may not maintain a schedule of apportionment for all fifty states.

Furthermore, for tax return preparation purposes there may be no need for a taxpayer to maintain a fifty-state schedule of standardized apportionment, because apportionment rules vary by state, and comparing one state with another may not be useful. Some states mandate market-based sourcing, whereas others require costs of performance for determining the situs of sales of other than tangible personal property. States also have rules that may require exclusion of certain receipts from the sales factor or require special treatment for certain industries, such as broadcasting or transportation. Because of these and a myriad of other differences, taxpayers simply may not maintain spreadsheets that compare state apportionment results.

The MTC audit manual provides that an auditor should endeavor to begin the audit field work one year before the earliest statute of limitations of the audit period expires.32 In some instances, one year is insufficient time to complete an audit, and the MTC will request a statute-of-limitations waiver at least three months prior to the expiration of any statute of limitations.33 If the taxpayer refuses to sign a waiver, the auditor will complete the audit to the best of the auditor’s ability and will send the audit to the states as a recommended assessment.34 A taxpayer has the right to refuse to sign a waiver, and some taxpayers have a general policy not to sign waivers absent unusual circumstances. For those taxpayers who take a “no waiver” policy, it is important to convey that policy at the start of the audit and to include it in the audit plan.

Because an MTC audit can lead to a bevy of state assessments within a short period—creating a resource crunch for a taxpayer’s audit personnel—the MTC will consider staggering the issuance of its recommended assessments. Doing so allows a taxpayer to handle the assessments in groups, sometimes organized by filing method (e.g., combined-reporting states versus separate-reporting states) or by geography. Anticipating this challenge and including it in the audit plan can help to ensure a less stressful conclusion to the audit.

As the MTC expands its Audit Program, taxpayers should consider ways to identify and limit potential exposure. It is important for taxpayers at risk of being nominated for a multistate joint audit to establish best practices and policies before the audit commences. Taxpayers should consider policies on waivers of statutes of limitations, the creation of multistate tax return schedules, the reasons for inconsistent state filing positions, and the potential for exploring beneficial tax return positions during the course of an audit.

Jeffrey A. Friedman is a partner and Chris Lee and Suzanne M. Palms are associates at Eversheds Sutherland (US) LLP.