Despite budgetary and resource constraints at the Internal Revenue Service, corporate boards, securities regulators, and even the IRS are pressing to see increased transparency, greater speed, and enhanced precision on the part of large business taxpayers, according to KPMG tax professionals Mike Dolan and Tom Greenaway.

In terms of U.S. tax administration, a “large case” is generally considered a matter involving the largest corporations and partnerships, many covered by the coordinated industry case (CIC) program administered by the IRS. Under that program, Dolan and Greenway explain, the IRS designates CIC cases on the basis of a points system, which places emphasis on size and complexity of the enterprise using a variety of criteria, including:

“We would expect the IRS Large Business & International (LB&I) division to apply many of the changes it is currently considering to a wider swath of cases than just those meeting traditional CIC standards,” say Dolan and Greenaway.

“Generally, when reliable data is paired with a rigorous analysis, it is easier to establish the correctness of the taxpayer’s position. The IRS then has an opportunity to only undertake modest testing and sampling of the data, and look for quicker resolution, which is in everyone’s interest.”—Mike Dolan and Tom Greenaway

The IRS is operating under more severe budgetary and personnel limitations than it was a decade ago. “Overall budget reductions have reduced the number of IRS personnel assigned to examine the largest entities,” say Dolan and Greenaway.

For example, they explain, the total number of examiners and specialists employed by the IRS in the last five years has been cut through attrition. In addition, the IRS training budget has been cut significantly in the last several years, and the agency has reported that it has been forced to reduce its investment in new technology and other administrative tools and resources, which collectively place the service “at a great disadvantage when compared with the entities they are examining,” according to Dolan and Greenaway.

The move toward more speed and accuracy requires taxpayers to “find facts faster; manage and access large volumes of data; apply technology such as predictive coding to the data; and present results in a timely manner to management, financial statement auditors—and the IRS—for review and testing,” explain Dolan and Greenaway.

The IRS is not the only agency that is taking a closer look at documentation and accuracy in reporting financial transactions. SEC comment letters frequently mention tax issues. And for the first time since 2008, the SEC is increasing its enforcement of alleged accounting fraud.

Here are the top five common causes of tax restatements, according to an article by Randy Robason published by TEI:

Robason is the national partner in charge of tax accounting and risk advisory services for Grant Thornton LLP in Dallas, Texas, and served as a member of the advisory board for Tax Executives Institute’s 2011–12 Corporate Tax Department Survey.

“Every single one of these [causes of tax reinstatement] could be included under the heading of ‘No Surprises,’ ” Robason wrote. More than 72 percent of the respondents in TEI’s survey that year indicated that the number-one measurement of tax department success was “lack of surprise.” Speed and precision in the tax function are key to avoiding surprises. The tax department’s other measurements of success generally fell under the broad categories of “complies with all regulatory authorities” or “provides value-added advice.”

According to Robason, the most interesting measurement—and one that directly relates to risk—is that 60 percent of the TEI respondents indicated they are evaluated on “results of audits.”

In addition to precision and speed, there’s the issue of transparency. The drive and public pressure toward increased transparency is ubiquitous in our society—from disclosures in clinical trials to financial records demanded of our elected officials.

It’s no different in the tax arena. For example, say Dolan and Greenaway, the passage of the Sarbanes-Oxley Act resulted in greater sensitivity to tax behaviors and risks throughout corporate governance. A long-term trend demands more and more transparency from large taxpayers, they assert, citing as examples Form 8275 (see box on p. 32), Schedule M-3, and Schedule UTP (uncertain tax positions).

The OECD’s base erosion and profit-shifting (BEPS) initiative is yet another example of tax administrators’ efforts to drive taxpayers to be more transparent. “A key objective of the BEPS project is to increase transparency through improved transfer pricing documentation standards, including through the use of a country-by-country reporting template,” according to the OECD.

The G20-OECD BEPS action plan on guidance on the implementation of transfer pricing documentation and country-by-country reporting, which illustrates the movement toward increased global transparency, was released in February. (See sidebar). 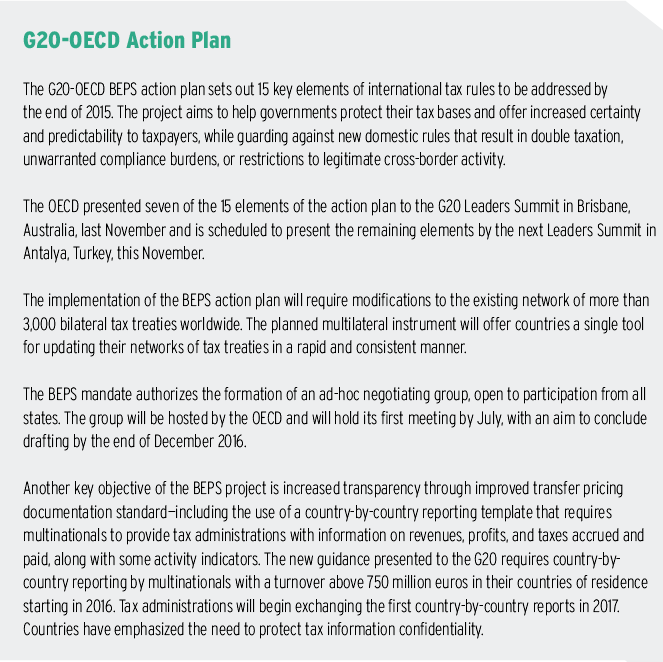 So what happens when the rubber meets the road—when the IRS, strapped for resources, confronts taxpayers looking for greater precision and speed in resolving tax issues? Many tax issues, such as bad-debt deductions, basis calculations, earnings and profits, foreign tax credits, and research credits require an ability to digest, synthesize, and analyze massive amounts of data, note Dolan and Greenaway. “Owing to constraints on its budget, technology, and process, traditional IRS examination teams are not well positioned to evaluate huge amounts of data with an eye toward finding the materially correct answer. Quite understandably, when presented with unorganized or incoherent data, the institutional and inherent skepticism of the IRS audit function takes over, they explain. “It is important to prepare strong valuation and transfer pricing analyses, for instance, before an IRS specialist does,” say the two tax professionals.

Taxpayers should therefore adopt an approach that leverages technology to marshal all the relevant information into a reliable data set, then couple the data with a strong, credible analysis. “Generally, when reliable data is paired with rigorous analysis, it is easier to establish the correctness of the taxpayer’s position. The IRS then has an opportunity to undertake only modest testing and sampling of the data and look for quicker resolution, which is in everyone’s interest,” assert the two KPMG professionals.

To reach reasonable resolutions on complicated fact questions, tax executives must be aware of—and consider using—the IRS’s early certainty programs, say Dolan and Greenaway. And remember, they add: There’s often the possibility of custom-tailored dispute tools, such as compliance agreements, to resolve complicated issues. For instance, erroneous Form 1099 or Schedule K-1 reporting can affect tens of thousands of taxpayers. Entity-level compliance agreements offer a way to cut the administrative and investor-relations burden in these cases down to a minimum.

“We would expect the IRS Large Business & International (LB&I) division to apply many of the changes it is currently considering to a wider swath of cases than just those meeting traditional CIC standards.”—Mike Dolan and Tom Greenaway

In the last several years corporate America has shown a remarkable appetite for early certainty in tax—influenced in part by FIN-48. Beyond that, corporate governance policies often place greater emphasis on tax risk-avoidance or reflect the desire not to be identified in the media as a tax outlier, Dolan and Greenway say. Obtaining tax certainty sooner has become a matter of competitive advantage across some industries, starting with retailers and spreading to others, even financial services.

Each of the IRS’ early certainty programs comes with reasonably specific procedural rules and costs, they explain. Two concerns predominate in this area, according to Dolan and Greenaway:

Dolan and Greenaway suggest that it is not only important to maintain the current pre-filing agreement (PFA), advance pricing agreement (APA), compliance assurance process (CAP), and industry issue resolution (IIR) initiatives, but that broadening their reach could help the IRS by limiting what needs to be addressed in post-filing examinations. “Taxpayer submission of issues into these pre-file programs also provides the IRS a valuable window into current types of taxpayer transactions and issues—often months and years before the IRS might see the issue on a tax return,” they explain.

“Taxpayer submission of issues into these pre-file programs also provides the IRS a valuable window into current types of taxpayer transactions and issues—often months and years before the IRS might see the issue on a tax return.”—Mike Dolan and Tom Greenaway

In general, corporate voluntary disclosures, where the company uncovers an error and seeks to correct it, have become more difficult to accomplish in recent years because of IRS resource constraints, Dolan and Greenaway say. In this regard, the two tax professionals suggest two alternative approaches that might be considered.

The first would be for the IRS to create a disclosure/correction application process, which is less formal and more administrative than the section 9100 relief process. Under such a program, a taxpayer could identify, disclose, and correct its error or omission in an expedient manner without threat of penalty and with an agreement to pay requisite interest or other compliance tolls where appropriate.

The second approach would be to formalize a true-up regime, wherein a corporate taxpayer that discovers an error after it has filed its return can true-up the issue on the next filed return and pay any interest (but no penalty) that might accrue.

As a practical matter, these regimes already exist, in places, for well-represented taxpayers and CIC taxpayers who enjoy good relationships with their examination teams. They should be available across the board, suggest Dolan and Greenaway.

“Overall budget reductions have reduced the number of IRS personnel assigned to examine the largest entities.”—Mike Dolan and Tom Greenaway

In trying to resolve technical disputes earlier, taxpayers ought to consider all alternatives, including fast-track settlements, traditional appeals, and post-appeals mediation, Dolan and Greenaway say. Other options that the government could consider, according to the KPMG professionals, are: