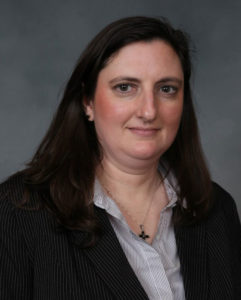 One month after graduating from college with a bachelor of science in biology, Wallace and her husband started their family. She chose not to pursue her plans to become a physical therapist.

“I waited tables for four years because it provided flexible hours for my husband and me to trade off raising our son instead of having him in day care,” Wallace explains. She spent a lot of time deciding what she wanted to study before she went back to school. “I would come home late from work and read financial magazines and balance my checkbook to wind down and relax, so I chose to study accounting. Everything just seemed to make sense in my first principles of accounting course, and I realized I had chosen the right field this time. It was the same with my first tax course. The reading and coursework were fun, and I seemed to have the skills necessary to be successful in a tax career,” she says.

Her career has certainly been successful. Wallace, the senior tax director at Sonic Corp., the largest chain of drive-in restaurants in the United States, has had to deal with some challenging issues. During her first few years at Sonic, the restaurant side of the company switched from about 700 company-owned stores operated as separate legal partnerships to about 400 stores reported as cost centers within the corporate structure. “Calculating and reporting the tax effect of re-franchising 300 stores was a large and unusual transaction for the accounting and tax departments. The year following the largest of the sale transactions, the remaining locations merged into the corporate entity. This required a reconciliation of the outside partnership basis to the inside basis of the assets.

“The successful completion of this project is one of my biggest career accomplishments to date,” she says.

The first obstacle, she says, was identifying why the basis reconciliation did not balance. “Two of us in the tax department spent countless hours analyzing the data and finally realized that some of the book data did not represent what we thought it did. That was when I learned that GAAP accountants and tax accountants do not always speak the same language. The next obstacle was determining how to obtain the data necessary to compute the accurate tax basis. This was complicated by some system limitations and other issues, but we were able to problem-solve and obtain what was needed. I still apply lessons learned from that project to my regular work responsibilities,” Wallace says.

The challenges are ever present, according to Wallace. “While I don’t like to admit it, accounting for income taxes is probably the most challenging and interesting part of my job responsibilities. Every time I think we’ve come close to understanding everything needed to accurately and efficiently account for income taxes, something new arises, either because of a change in business or a change in focus of oversight agencies or external auditors,” she explains.

Wallace started her tax career as an intern at the Fort Worth, Texas, office of Deloitte Tax LLP while she was in graduate school. She stayed on part-time until she graduated and worked her way up to manager. “My eight years at a small Deloitte office prepared me better than any other experience could have for my future roles in a corporate tax department. I learned about all areas of income tax, including state and federal compliance, accounting for taxes, controversy, and planning,” she notes.

The most problematic tax law problem she’s encountered in her career? Applying the uniform capitalization rules to a quick-service restaurant business. It wasn’t the most technically challenging, she says, but it was definitely difficult to make the examining agent understand that the simplified production method produced an inequitable result for a business that didn’t have any finished goods at the end of a given day, much less at the end of a taxable year. Sonic took the issue to Appeals, and Wallace realized her best option was to agree with the adjustment and file a change in accounting method, she says. At the end of the day, she adds, the company obtained the desired result. “It just took more effort and time than we would have liked,” she says.

“I can and dehydrate the fruit and vegetables we grow and the meat we hunt.”
—Angela Wallace

Wallace is an enthusiastic supporter of TEI. “Joining TEI helped me meet corporate tax accountants in Oklahoma. I was able to start building relationships with professionals who were facing similar challenges as me and those who had a wealth of knowledge to share,” she says. “I embraced the opportunity to become involved in local TEI leadership of the former Oklahoma Chapter, which quickly led to the whirlwind development of a new TEI chapter in Oklahoma City. Starting the new chapter really broadened my exposure to the opportunities within the national TEI community, as well as expanded my network of corporate tax professionals locally and nationally.”

Down on the Farm

Wallace and her husband live and work on a small pecan farm, raising chickens and rabbits and growing fruits and vegetables in addition to pecans. Her husband works the farm full-time, and she plants, harvests, and processes in the evenings and on weekends. “I can and dehydrate the fruit and vegetables we grow and the meat we hunt,” she says.

Wallace credits her husband for providing support for her work. “I wouldn’t have such a fulfilling career without the support and flexibility of my husband and our two kids. My husband is the primary person at home when needed and drives our daughter to practices, so I only have to be there for the games or band performances. Our oldest child is now graduated from college and working as a chemist. Our youngest is 13 and does a lot of work on the farm along with her school, band, and sporting activities,” she says.

Wallace celebrated her fortieth year by walking sixty miles in three days at a Susan G. Komen event to raise funds for breast cancer research, education, and community outreach. “The mental and physical challenge of the months of training, combined with the energy and amazing people at the event itself, resulted in one of the most rewarding experiences of my life,” she says.

Getting to Know … Angela Wallace