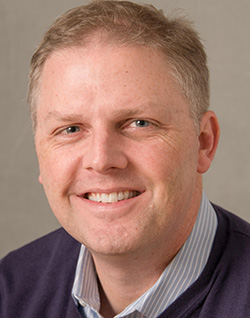 Some tax specialists come to the profession late in life. But not Andy Vickers.

For Vickers, vice president, corporate tax, at Nordstrom in Seattle, Washington, the business bug bit him in high school. “I was always math-focused in high school and interested in business generally,” Vickers explains. “I knew I wanted to work in a professional environment. That led me to the business school in college and an accounting degree. I interviewed with the large accounting firms (the “Big 8” firms at the time), and a few of them were beginning to hire folks directly into the tax side of the house.”

Tax appealed to Vickers because of the technical puzzle-solving required when applying complicated laws to complicated facts. “With my very limited perspective coming out of college, tax seemed to be more of an opportunity to get into this type of work more quickly than the audit side of the firm,” he says.

Vickers finds dealing with tax controversies fascinating because it combines technical analysis with tactical judgment in an attempt to reach an appropriate outcome, whatever that may be at the time.

“Tax controversy, like any controversy, highlights that there are multiple ways to look at an issue, that we have our own point of view and inherent biases, and very few issues are black and white,” he explains. “To build the best, most effective argument or settlement approach in these situations, it is equally important to understand the other side’s views and approach to the issue, and what they may consider an appropriate outcome.”

It’s not easy to keep up with federal tax laws and apply them to complicated scenarios, according to Vickers, who notes that things become exponentially tougher when you add in state and international tax policies and laws. Auditors have a tough task as well for a lot of the same reasons, he adds. “For most of my career,” Vickers says, “the toughest tax law problems I had to deal with relate to intercompany transactions. Whether in the state or foreign context, aligning business reality to complex tax rules is a constant and ongoing challenge. This area continues as a consistent source of tax controversies as well.”

Vickers has a seasoned perspective on tax issues. “Coming out of college I felt I needed to find the one ‘right’ answer, and it was usually pretty well defined,” he says. “As I began to gain work experience in a dynamic business environment, I quickly realized that issues can’t easily be boiled down to a simple right or wrong answer and that most issues involve a lot of judgment. Over time I found this lack of simple clarity to actually be energizing for me. I enjoy the challenge of digging deeper into issues to develop options and communicate potential solutions and trade-offs.”

Experience at AT&T Wireless and PwC

Prior to Nordstrom, Vickers had stints at AT&T Wireless and PwC that prepared him well for his current job. “I had a great run at PwC. It was a challenging environment, but I got to work with many smart, committed professionals,” he says. “You never waste a day in public accounting, as you get great training by being exposed to different and challenging experiences. I learned a ton and formed many relationships, both professional and personal, that continue to this day. A challenging aspect of working in a fast-paced client service environment is that you feel overwhelmed often—and I certainly did. I learned to push through and really grow from those experiences. AT&T Wireless was a great opportunity for me that helped me achieve my current role at Nordstrom. I was a senior member of AT&T Wireless’ tax department, which was full of talented tax folks tackling very big issues at the time—for example, implementing Sarbanes-Oxley, merging with a major competitor [Cingular], dealing with the IRS. This role helped me realize that my prior experiences in the public accounting world translated well into the corporate tax department world.”

His experience at Nordstrom has been particularly rewarding, Vickers says, because of the people on his team: “We have tough jobs to do and we spend a lot of time together, so it’s great to work with people you enjoy being around. Nordstrom’s service mindset for customer service in their stores is a key cultural component for us, and it dictates how we treat employees as well. Selfishly, I also love the fact that whenever I introduce myself to someone new and they learn I work for Nordstrom, there is always a positive reaction and usually a ‘Nordstrom story’ of a great customer service experience. As someone who has worked at different points in my career for a cell phone carrier and an airline food provider, I really appreciate the strong positive reaction to Nordstrom’s brand.”

Nordstrom recently opened its first non-U.S. store location (in Canada), which has been particularly exciting for Vickers. “While Canada feels similar to the U.S. market, there are many things that distinguish our Canadian customers, and we have enjoyed introducing our brand and learning how best to serve them,” he says. “We’ve never had a foreign store before, so opening our first stores in Canada has been challenging but also exciting for the tax department. Nordstrom’s U.S. tax structure reflects primarily organic store growth over decades. For our Canadian expansion we had the opportunity to build our tax structure largely on a clean sheet of paper and match business strategies with a flexible and efficient tax structure. From a tax standpoint we were pretty aware that we had a lot to learn when we began this international expansion. We aggressively chased what we didn’t know, worked with experts, and got smarter as quickly as we could. Additionally we proactively engaged across various functional areas within Nordstrom in a way we had not done previously. Looking back, I think our work connected to our Canada stores helped advance the profile of our tax team to be a more valued business advisor, which is where we want to continue to add value.”

Vickers says that TEI has been a great experience for many reasons, but he finds the networking and sharing of experiences most rewarding. “I always associated TEI as a way to get needed CPE hours, but I didn’t realize how valuable it would be to see how other peer tax departments tackle issues as well as providing a great forum to continue to build relationships with folks in the tax community,” he says. “Seattle has a great chapter full of top-tier corporate tax departments, and I have worked with many of these folks over the years as clients or coworkers. Being a part of TEI has provided an effective forum to further these prior relationships and build new ones.”

When not hunkered down in tax mode, Vickers enjoys reading nonfiction. He’s also a political junkie and a sports enthusiast, playing basketball and watching football (yes, he’s a Seahawks fan). “I’m also a lifelong Florida State Seminole college football fan. And I love music, especially Pearl Jam and classic eighties rock,” he adds. Finally, Vickers notes, he also enjoys spending time with his wife and two boys when they are home from college.

Things to Know About … Andy Vickers