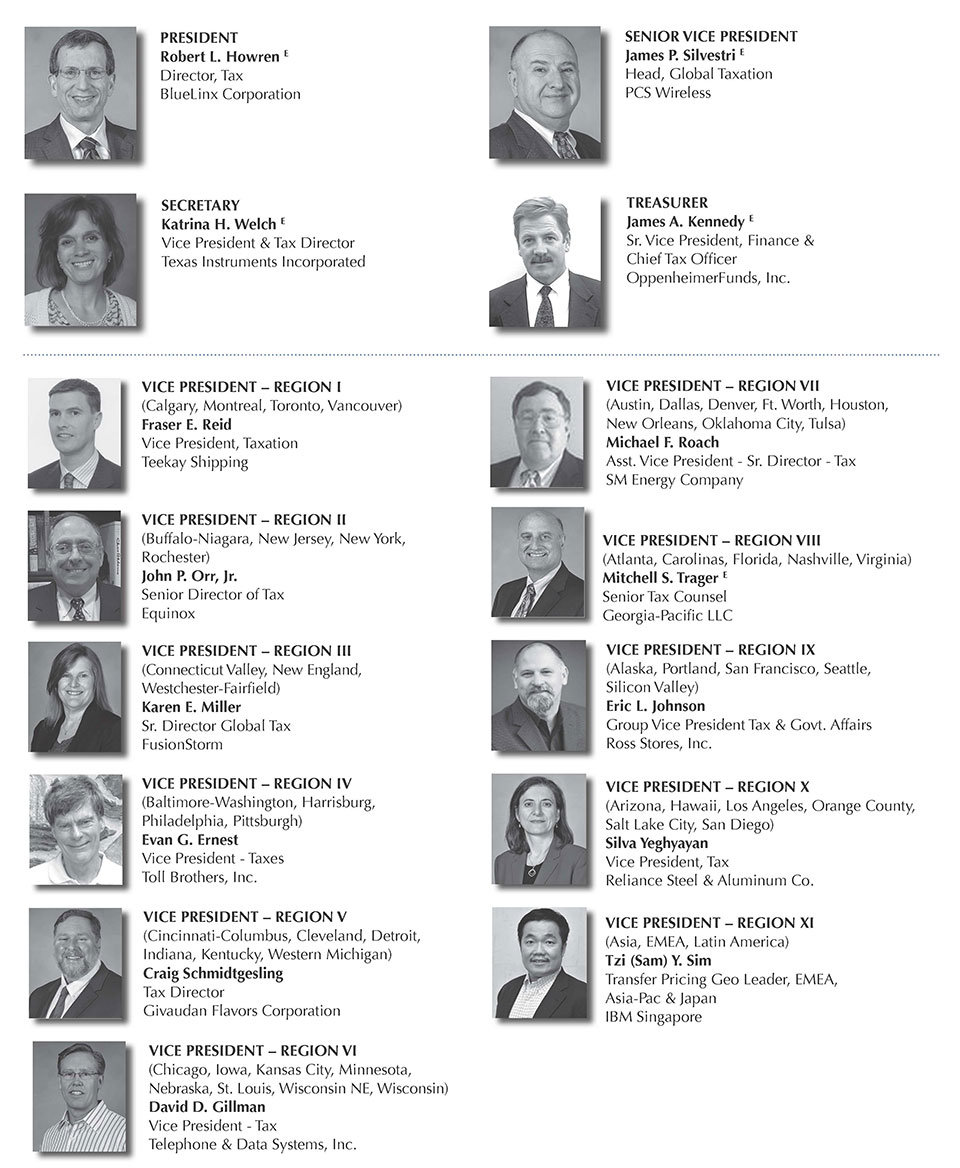 To the Board of Directors
Tax Executives Institute, Inc. and TEI Education Fund

Management is responsible for the preparation and fair presentation of these consolidating financial statements in accordance with accounting principles generally accepted in the United States of America; this includes the design, implementation, and maintenance of internal control relevant to the preparation and fair presentation of consolidating financial statements that are free from material misstatement, whether due to fraud or error.

Our responsibility is to express an opinion on these consolidating financial statements based on our audits. We conducted our audits in accordance with auditing standards generally accepted in the United States of America. Those standards require that we plan and perform the audits to obtain reasonable assurance about whether the consolidating financial statements are free of material misstatement.

We believe that the audit evidence we have obtained is sufficient and appropriate to provide a basis for our audit opinion.

In our opinion, the consolidating financial statements referred to above present fairly, in all material respects, the individual and con- solidated financial positions of Tax Executives Institute, Inc. and TEI Education Fund as of June 30, 2017 and 2016, and the changes in their net assets and their cash flows for the years then ended in accordance with accounting principles generally accepted in the United States of America. 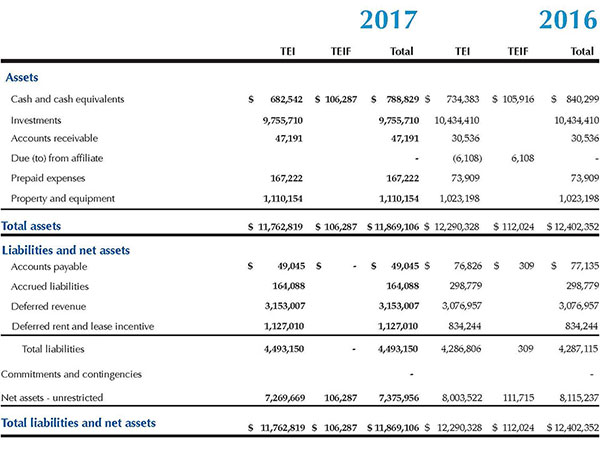 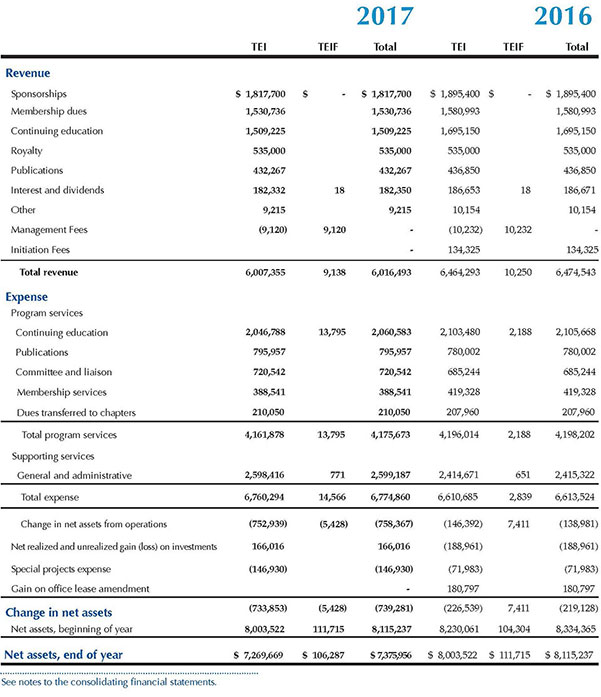 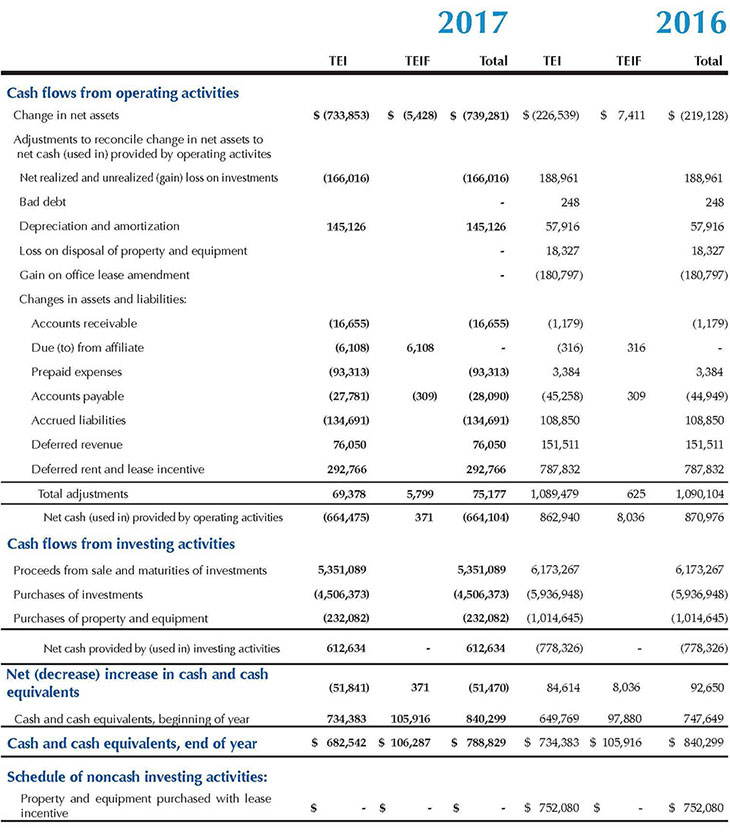 A. ORGANIZATION AND SUMMARY OF SIGNIFICANT ACCOUNTING POLICIES

Organization: Tax Executives Institute, Inc. (TEI) was incorporated in 1944 in the State of New York and exists to enhance and improve the tax system and to serve TEI members, their employers, and society generally by facilitating interaction among, and the training of, members and their staffs, by effectively advocating its members’ views, and by promoting competence and professionalism in both the private and government sectors. TEI Education Fund (TEIF) was formed in 1987 in the Commonwealth of Virginia and exists to sponsor TEI’s conferences, seminars, and tax courses.

Principles of consolidation: The consolidating financial statements include the accounts of TEI and its affiliate, TEIF (collectively re- ferred to as the Organization). Significant intra-entity accounts and transactions have been eliminated in consolidation.

TEI has operating loss carry-forwards resulting from its unrelated business activities of approximately $7,700 which may be applied against future years’ taxable income. A deferred tax asset has not been recognized due to the uncertainty of realizing the benefit of the loss carry-forwards.

Basis of accounting: The Organization prepares its consolidating fi- nancial statements on the accrual basis of accounting. Revenue is rec- ognized when earned and expense when the obligation is incurred.

Use of estimates: The preparation of financial statements in conformity with accounting principles generally accepted in the United States of America requires management to make estimates and assumptions that affect certain reported amounts and disclosures. Actual results could differ from estimates.

Credit risk: The Organization maintains demand deposit accounts with commercial banks and money market funds with financial institutions. At times, certain balances held within these accounts may not be fully guaranteed or insured by the U.S. Government. The uninsured portions of these accounts are backed solely by the assets of the underlying institution. Therefore, the failure of an underlying institution could result in financial loss to the Organization.

Market value risk: The Organization also invests funds in a professionally managed portfolio of short-term and long-term investments which contain various types of marketable debt and equity securities. Such investments are exposed to market and credit risks and may be subject to fluctuations in fair value. As a result, the investment balances reported in the accompanying consolidating financial statements may not be reflective of fair value during subsequent periods.

Investments held in the short-term and long-term portfolios consisted of the following at June 30: 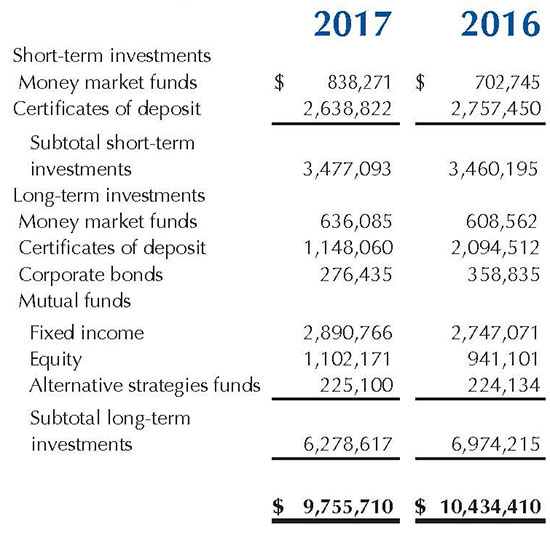 Investment return: Interest and dividends and net realized and unrealized gain (loss) on investments have been presented on the face of the consolidating statements of activities. However, investment management fees have been included in general and administrative expense and totaled $27,979 and $28,052 during the years

Fair values: In accordance with accounting principles generally accepted in the United States of America, the Organization uses the following prioritized input levels to measure investments recorded at fair value. The input levels used for valuing investments are not necessarily an indication of risk.

Investments valued using Level 1 inputs include various types of mutual funds, such as fixed income, equity, and alternative strategies (exchange traded funds, closed-end funds, and unit investment trusts). Mutual funds were valued based on quoted prices for identical assets in active markets. Furthermore, the alternative strategies funds were valued based on the inputs used in the valuation of their underlying portfolios of securities, which were primarily Level 1.

Investments valued using Level 2 inputs include corporate bonds, which were valued by pricing vendors using outside data. In determining fair value of the investments, the pricing vendors used a market approach to obtain pricing spreads based on the credit risk of the issuer, maturity, current yield, and other terms and conditions of each security.

Management believes the estimated fair values of investments to be a reasonable approximation of their exit price.

The following is a summary of the input levels used to determine fair value of investments, which are measured on a recurring basis, at June 30, 2017:

Investments recorded at cost include certificates of deposit and money market funds, which are not required to be classified in one of the levels prescribed by the fair value hierarchy. Therefore, investments at cost have been excluded from classification within the input levels detailed in the charts above.

Money purchase plan: TEI has a defined contribution money-pur- chase retirement plan, which covers all eligible employees who meet age and length-of-service requirements. Under the plan, TEI’s annual contribution amounts to 8% of each participant’s compensation. Participants are fully vested after six years of service. TEI’s contribution to the plan totaled $184,262 and $178,463 for the years ended June 30, 2017 and 2016, respectively.

401(k) plan: TEI has a defined contribution salary deferral and savings incentive plan, which covers all eligible employees who meet age and length of service requirements. The plan includes automatic enrollment with an opt-out option. Under the plan, TEI matches employee contributions as follows: 50% of the first 2% of compensation, and 25% of the next 4% of compensation up to the maximum contribution allowed by Internal Revenue Service limits. Participants are fully vested after five years of service. TEI’s contributions to the plan totaled $41,697 and $40,320 for the years ended June 30, 2017 and 2016, respectively.

Acquisitions of property and equipment greater than $1,000 are recorded at cost and depreciated or amortized using the straight-line basis over the following useful lives: office furniture and equipment – three to ten years; leasehold improvements – over the lesser of the remaining life of the office lease or the estimated useful life of the improvements.

Property and equipment consisted of the following at June 30,:

The following is a summary of the input levels used to determine fair value of investments, which are measured on a recurring basis, at June 30, 2016: 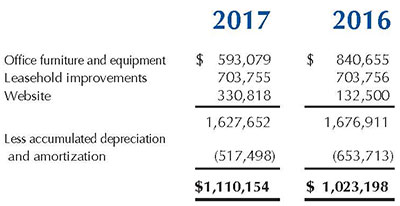 Revenue received in advance of the period in which an earnings process completed is recorded as deferred revenue and, when earned in subsequent years, the revenue is recognized.

Deferred revenue consisted of the following at June 30,: 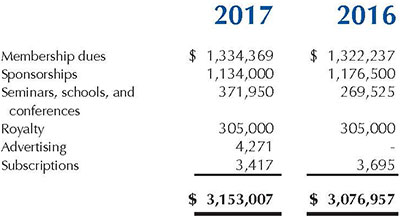 Unrestricted net assets include those net assets whose use is not restricted by donors, even though their use may be limited in other respects, such as by board designation. The Organization has the following designated net asset categories:

Unrestricted net assets consisted of the following at June 30,: 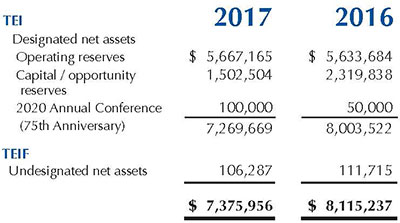 Pursuant to a written agreement, TEI administers certain continuing education courses which are sponsored by TEIF. Under the terms of the agreement, TEI pays a percentage of the net income from the sponsored courses to TEIF. The management fees paid by TEI totaled $9,120 and
$10,232 for the years ended June 30, 2017 and 2016, respectively.

Office lease: TEI has an operating lease for office space that was amended effective May 2016 and expires February 2028. As a result of the amendment, TEI wrote off the May 2016 balance of the liability for deferred rent and lease incentive, which was related to the previous amendment, and recorded a gain on office lease amendment totaling $180,797 for the year ended June 30, 2016.

The office lease contains annual escalations of the monthly base rent. In accordance with generally accepted accounting principles, the difference between cash payments required under the terms of the lease and rent expense has been reported as deferred rent in the accompanying consolidating statements of financial position. Deferred rent will be amortized on a basis to achieve straight-line rent expense over the life of the lease. The terms of the office lease also include a tenant improvement allowance of $752,080 which will also be amortized on a straight line basis over the term of the lease. The liability for deferred rent and lease incentive totaled $1,127,010 and $834,244 at June 30, 2017 and 2016, respectively. 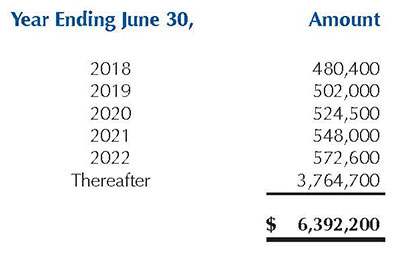 Hotel contracts: TEI has agreements with hotels to provide con- ference facilities, meeting space, and room accommodations for future events. The agreements contain cancellation or attrition clauses whereby TEI may be liable for liquidated damages in the event of cancellation or lower than anticipated attendance.